I. "Names don't constitute knowledge", the great professor and physicist Richard Feynman declared in an interview in 1973.

I know that A2 + B2 is equal to C2, that equation is called the Pythagorean Theorem, and it was named after Pythagorus. But I couldn't tell you why it works or how it works. I may be able to cobble together enough words to make a somewhat decent description, but I'll look like a fool trying to explain it to someone who has never heard of Geometry before. I have the knowledge of it, not the understanding.

That's not the only thing I'm lacking knowledge about. I've read 200+ books in the last few years and could probably summarize off the top of my head about 15 of them. The rest I may be able to recognize the title and paint a broad picture of the author's ideas, but that's about it. I've read the books, but I don't understand the books.

II. This type of person, someone who has a lot of knowledge but no understanding, is what the blog More to That has penned as a "Dumb-Smart Person." A Dumb-Smart Person (DSP) is someone who has acquired loads of textbook knowledge, but doesn't know how to handle a situation that isn't pre-defined by something they've learned. They know the information, but don't understand it. What little information they do know, they're unable to adequately recognize when it's not in the context they've learned it in.

This is what I call context-dependent knowledge and it's a lot more common than you think. 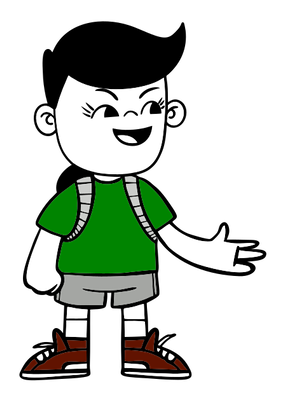 Kyle is a studious college senior who loves to read biographies of businesses and entrepreneurs. He's getting a degree in business, but it's not scratching the itch as much as he would like. He needs real examples, not case studies.

He had just finished reading Benjamin Franklin's biography and was struck by a well-known story about Ben Franklin asking a foe to borrow one of his books. The foe accepted and upon returning the book, the foe engaged in a friendly conversation with Benjamin. The foe was now a friend. Kyle thought this was incredible. Dealing with conflict has always been awkward, but this was a simple strategy that he could add to his toolkit to deploy when the time comes. Kyle noted the story in his "second brain" and moved on to the next read.

III. Awhile later, he was put in a situation where the book tactic would be of great use. During one of his classes, students were assigned a group project. He happened to be paired with Lex, another brilliant but not-so-kind and arrogant student. Kyle knew this was his opportunity to apply the learning from Ben Franklin's life.

"Okay," Kyle thought, "If I ask him to borrow a book, he's going to have to lend it to me, right? Then I'll read it and when I give it back to him, I'll tell him my favorite points and ask what his were. Genius."

Operation Ben Franklin was a go.

"Hey Lex, I know you like reading Angela Duckworth's work. Could I borrow Grit? I've heard great things and would love to read it."

"You can just get it from the library..." Lex claps back.

"Oh, right. Sorry thanks." Kyle mumbles out, embarrassed. Well that didn't work, he thinks to himself. What went wrong?

What went wrong?! You used a strategy that worked in 1750 where books were scarce and hard to get. You didn't understand the deeper knowledge of that strategy. You were stuck in context-dependent learning and failed to apply the knowledge from that situation into a modern-day environment. You got cocky with your "second brain" only to realize you may not be as smart as you think.

Kyle is a dumb-smart person who fell prey to context-dependent knowledge–only being able to apply the learning of something if it's in the exact same context in which you've learned it.

This has happened to me countless times on my journey to learn programming. Watching a tutorial and following along step-by-step gives me some knowledge of how certain programming languages work, but if I don't understand how it works or why it works the way that it does, I won't know what methods to use in what situations when I'm trying to build things on my own out in the wild. I have to work really hard at applying methods and concepts outside of the specific use case the tutorial taught me.

If I learn how to use the useEffect() hook from React one way, I'll fail to recognize how to use it when it's called for in a different context. Programming knowledge is very context-dependent. I've found that practicing on your own is the only way to overcome that obstacle and get out of tutorial hell.

IV. We can picture a Dumb-Smart person's journey through knowledge and understanding as two mountains. The Mountain of Knowledge on one side and the The Peak of Understanding on the other. 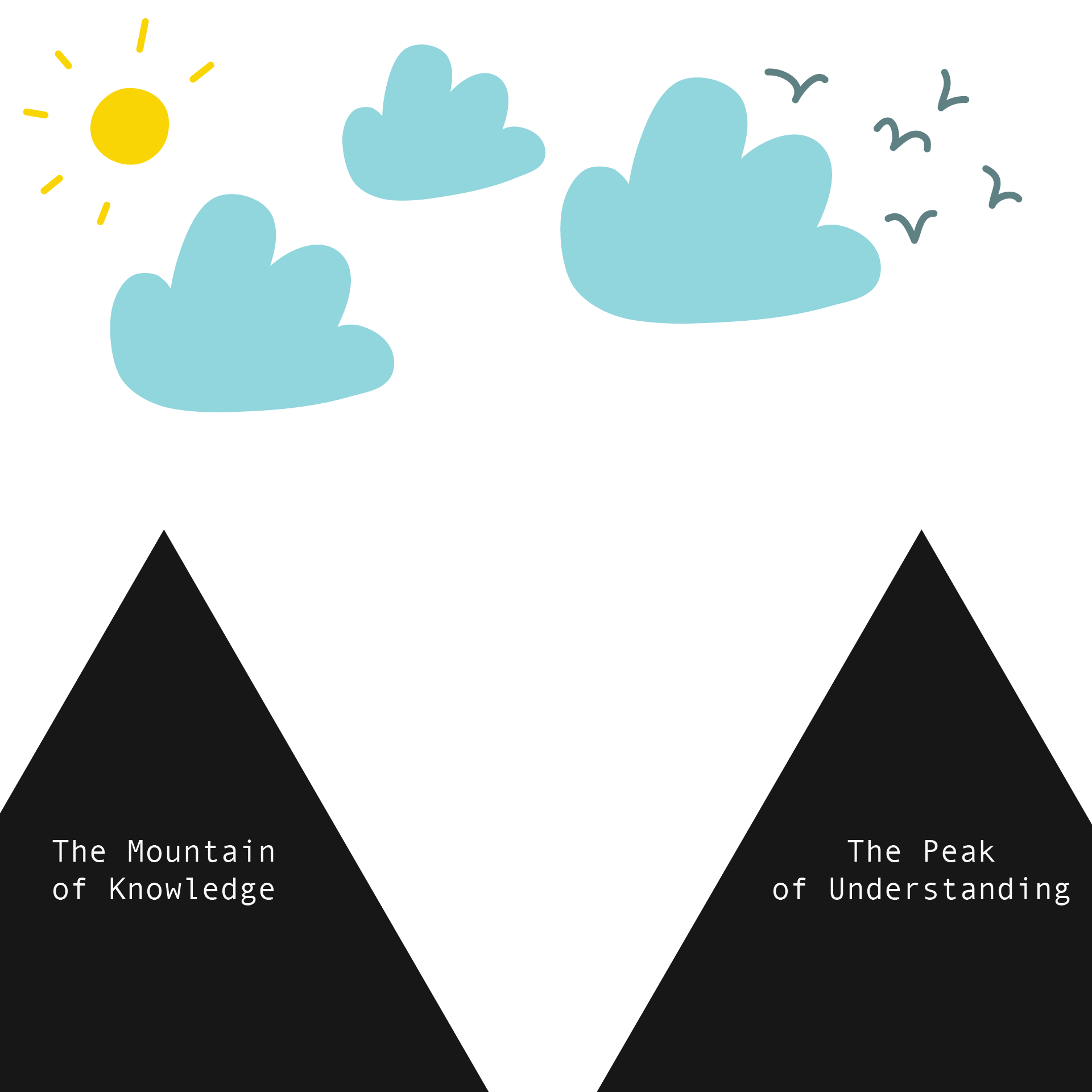 Splitting the gap between the two is the Trough of Failures–an essential part of moving from The Mountain of Knowledge to the Peak of Understanding. 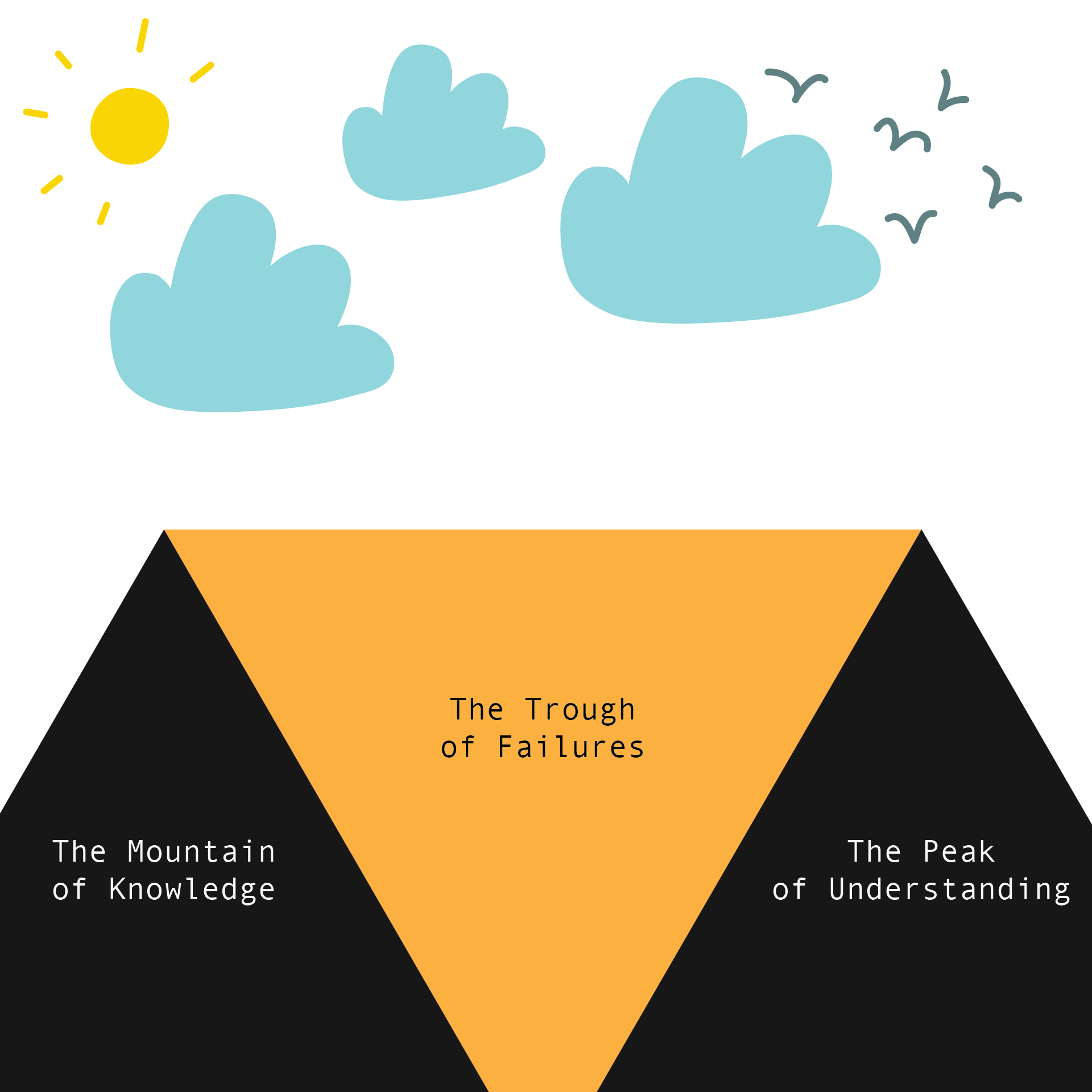 A dumb-smart person fails to recognize the gap between the two, assuming it's one big mountain that they've successfully conquered.

Man oh man do we have news for you.

To get to the Peak of Understanding, one must do two things:

First, recognize there's a gap there at all. An arrogant, ego-filled academic will never reach the Peak of Knowledge if they think they are already there.

Second, they must trek through the Trough of Failures. They do this by taking their knowledge, applying it in certain situations, and seeing where it fits and where it doesn't. This is often accompanied by endless amounts of failures because that's how we learn.

With each application of knowledge, we get closer and closer to reaching the Peak of Understanding, until, finally, we've made it and can communicate the concept or idea in a simple way.

It sounds simple. And honestly it really is. The biggest obstacle I've seen (and faced myself) is having the desire to make the jump from one side to the other in the first place. Ever since we started learning in school, we were awarded with memorizing knowledge:

We were never taught, nor had the use case for, a deeper understanding of any concepts. As long as we could memorize some key vocabulary terms, things turned out quite alright.

And this doesn't change as life goes on. Signaling your knowledge is the second-most important thing to signal in human society, not too far behind wealth. If you can sprout off a few facts about World War 2 and entertain a dinner table with crazy Greek mythologies, people will assume you're intelligent (Unless you're annoying while doing that. And it's very easy to be annoying in that situation.

People who have knowledge may get remembered, but those who seek to understand will never truly die.