How to Increase the Chances of Becoming a Genius

Earlier this week, Dwarkesh Patel wrote an essay exploring the mystery of the miracle year– "in which [scientists] make multiple, seemingly independent breakthroughs in the span of a single year or two" (source). Patel posits some potential explanations for the miracle year phenomenon including Selection Bias, right problem at the right time, and the amount of freedom the geniuses had at the time.

He concludes the piece saying:

I still don’t think I fully understand why these miracle years keep showing up in the lives of great scientists, except that it has something to do with them being young, concentrating intensely on the right problems, and remaining open to fresh perspectives.

The conclusion is a bit underwhelming, though it makes sense because these miracle years truly are a mystery and a lot of smart people have been thinking about them for a long time. But that conclusion can also be quite disappointing if you (1) aren't young and (2) don't feel like you're concentrating intensely on the right problems. Or if you're like me and don't even know what the right problems are.

So instead of focusing on the miracle year, I wanted to focus on the prior years and the second prior conclusion, how do you know what problems to focus intently on?

As Patel notes, Einstein's miracle year was in 1905. In the span of four short months, Einstein wrote four papers that answered a lot of seemingly unanswerable questions in physics. He lays out his plan in a letter to Conrad Habicht:

...I promise you four papers in return. The first deals with radiation and the energy properties of light and is very revolutionary, as you will see if you send me your work first. The second paper is a determination of the true size of atoms...The third proves that bodies on the order of magnitude 1/1000 mm, suspended in liquids, must already perform an observable random motion that is produced by thermal motion. Such movement of suspended bodies had actually been observed by physiologists who call it Brownian molecular motion. The fourth paper is only a rough draft at this point, and is an electrodynamics of moving bodies which employs a modification of the theory of space and time.1

The first paper, eventually titled "On a Heuristic Point of View Concerning the Production and Transformation of Light", described how "light comes not just in waves but tiny packets."1

The choice to uncover the light quanta phenomenon wasn't random. It was a deliberate choice to pursue answers to, at the time, unanswerable questions. This is our first hint at what can lead up to the making of a miracle year.

One of the main questions in physics at the turn of the 20th Century had to do with what the world is made of and how it reacts to things. Is the universe made of particles? Or is it a continuous field like gravity and electromagnetic fields are?

Einstein, in his 1905 paper, took those questions, combined them with the fundamental work of Max Planck and Phillip Lenard that had recently surfaced and created his first revolutionary breakthrough: light quanta.

If you were to continue studying Einstein's miracle year, you would see that formula for creating breakthroughs throughout his life. Unanswerable questions + recent discoveries x time to think about the solutions = revolutionary breakthrough.

It was his deep knowledge of physics and the mysteries that had yet to be answered combined with his insatiable desire to know what was currently being worked on and ample time to think about the problem that were factors that lead to his miracle year. The explanations Patel gives in his essay for this could be seen as Right Problem Right Time. I'd argue that's the most beneficial factor (and hardest to create) that lead to Einstein's 1905 success.

If you've studied the inventions of history or read How We Got to Now by Steven Johnson, you'd see over and over again the countless ideas and inventions that were created 10, 15, or 20 years too soon to really take off.

20 years before Edison created his phonograph, Édouard-Léon Scott de Martinville patented a machine that recorded sound. He was obsessed with shorthand writing and happened to study biology as a hobby. After he learned how ears capture vibrations in the air, he wondered if a machine could capture sound in the same way and record what it heard. His machine looked very much like Edison's original phonograph (picture below) but his device had one problem: it had no way of playing the recorded sound back. In his mind, this wasn't needed. Much like stenographers write in symbols interpreted by people, he assumed people would be able to interpret the etchings of his phonoautograph. Evidently that was not the case. 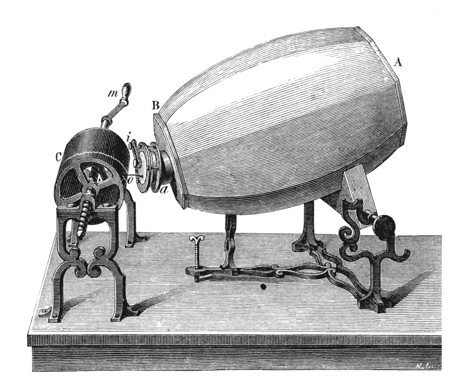 This is one example, of many more, of someone working on the right problem at the wrong time. If Einstein had been born 50 years earlier, he wouldn't have had Maxwell's equations to question nor would he have Planck's work to get him started on light quanta. But he wasn't, and to say, "Everything just has to work out in the right time" is another disappointing answer to the creation (or recreation) of more miracle years. And to that, we go back to Einstein.

If the miracle year phenomenon can't be solved and is indeed just that, a phenomenon, we need to ask what we can do to increase the likelihood of that phenomenon taking place. As mentioned previously, Einstein's formula for groundbreaking insights is:

And that formula is rooted in one thing: curiosity.

Walter Isaacson writing in his biography Einstein: His Life and Universe says this about his sense of wonder and curiosity at life:

Throughout his life, Einstein never lost his sense of wonder at the magic of nature's phenomena. He retained the ability to hold two thoughts in his mind simultaneously, to be puzzled when they conflicted, and to marvel when he could smell an underlying unity. 'People like you and me never grow old,' he wrote an old friend, 'We never cease to stand like curious children before the great mystery into which we were born.'

Einstein's ability to question the mysterious evidence at play in the world, without a doubt, lead to his miracle year. But he didn't just wonder about the big, gaping holes in physics. He wondered about the mundane things as well. Isaacson writes later:

Curiosity, in Einstein's case, came not just from a desire to question the mysterious. More important, it came from a childlike sense of marvel that propelled him to question the familiar, those concepts that, as he once said, 'the ordinary adult never bothers his head about.'

What this means for your miracle year

So if you're wondering how to increase the likelihood of your miracle year, I implore you to do three things.