Kevin Kelly, who arguably has written one of the most influential essays regarding the internet and the creator economy, "1,000 True Fans", published "103 Bits of Advice I Wish I Had Known" on his 70th birthday. In the simple article, he gives practical advice, philosophical quips, and everything in between. I thoroughly enjoyed reading it when it came out. So much so, I printed it out and annotated bits I loved and wanted to go deeper on.

To my luck, Freakonomics published an interview with him asking about that specific essay. Kelly was able to provide more context on his answers and share a few stories. The following comes from that interview.

One of the pieces of advice observe, very factually, that "ninety percent of everything, is crap." Kelly goes on to encourage the reader to, if they find something they don't like, just try finding the ten percent that is actually good. But how to find that ten percent was left as a mystery, until now. Stephen Dubner, the host of Freakonomics asked him for his advice on finding the "'non-crap' 10 percent":

I have to say, this one I’m talking to myself because I often get very impatient. So, the only bit of advice for me is to keep returning to it with as much grace and open-mindedness as possible because nine times out of ten you’re going to be very disappointed. So why are you going to go back the tenth time? Of course, life is limited. We can’t try all the stuff that we don’t like. But when I have a chance and it’s not too difficult, I’ll give things a second or third or fourth chance. And occasionally, I do change my mind and it’s like, “Wow, I’m glad that I pursued that because I didn’t see it in the beginning.” 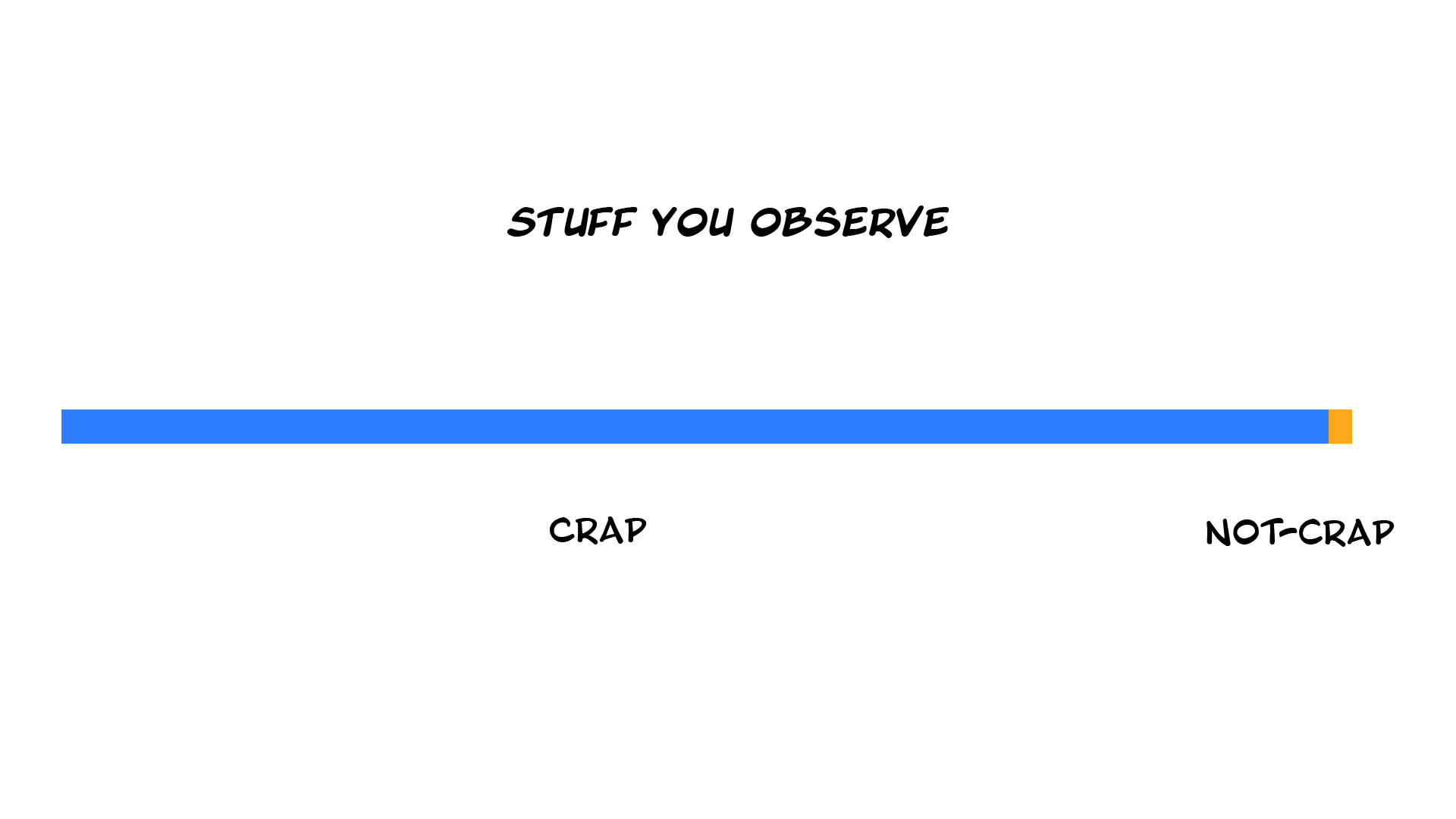 Dubner cited research that showed when people approach the ages of 30 or 40, they typically are set in the ways of the food they eat and the things they do. Trying new things just isn't much of an idea as you get older. Fortunately, Kelly had some simple advice to staying more fluid as one ages:

Don’t sit in the same chair every night. I deliberately try not to do that at the table, to make sure I don’t get into these ruts. And I ask my kids to make me a playlist for birthday presents. Give me all the music you’re listening to as a way to hear new things and see if I can get into it. When you go out to eat, order your favorite thing, and then order something you’ve never ordered before. I think it has to be a very deliberate thing. It doesn’t really come easy.

Another bit of advice has to do with the appreciation of luck: "Ask anyone you admire, their lucky breaks happened on a detour from their main goal. So embrace detours. Life is not a straight line for anyone." Kelly expanded on his reasoning for including this:

I have very little patience with particularly successful people who don’t acknowledge the luck. And if I have gained any knowledge or wisdom over time, it is my increasing realization and admittance that I am the product of luck. There is just no way around it. But having said that, I think you can still choose luck. I have to say this very carefully, in the sense that there are people who are luckier than others, and it’s not because of how they were born. I think there are probably different species of luck. The little bit I’ve read about luck is that people who have decided that they’re lucky are luckier. And so lucky people are expecting to be lucky, and that expectation is self-fulfilling. It’s kind of like that increasing returns — it’s because I have been lucky, I expect to be lucky, and therefore I am going to be luckier. In the same way, if you decide that you’re an unlucky person, you’re not going to be lucky. And that’s also been proven. 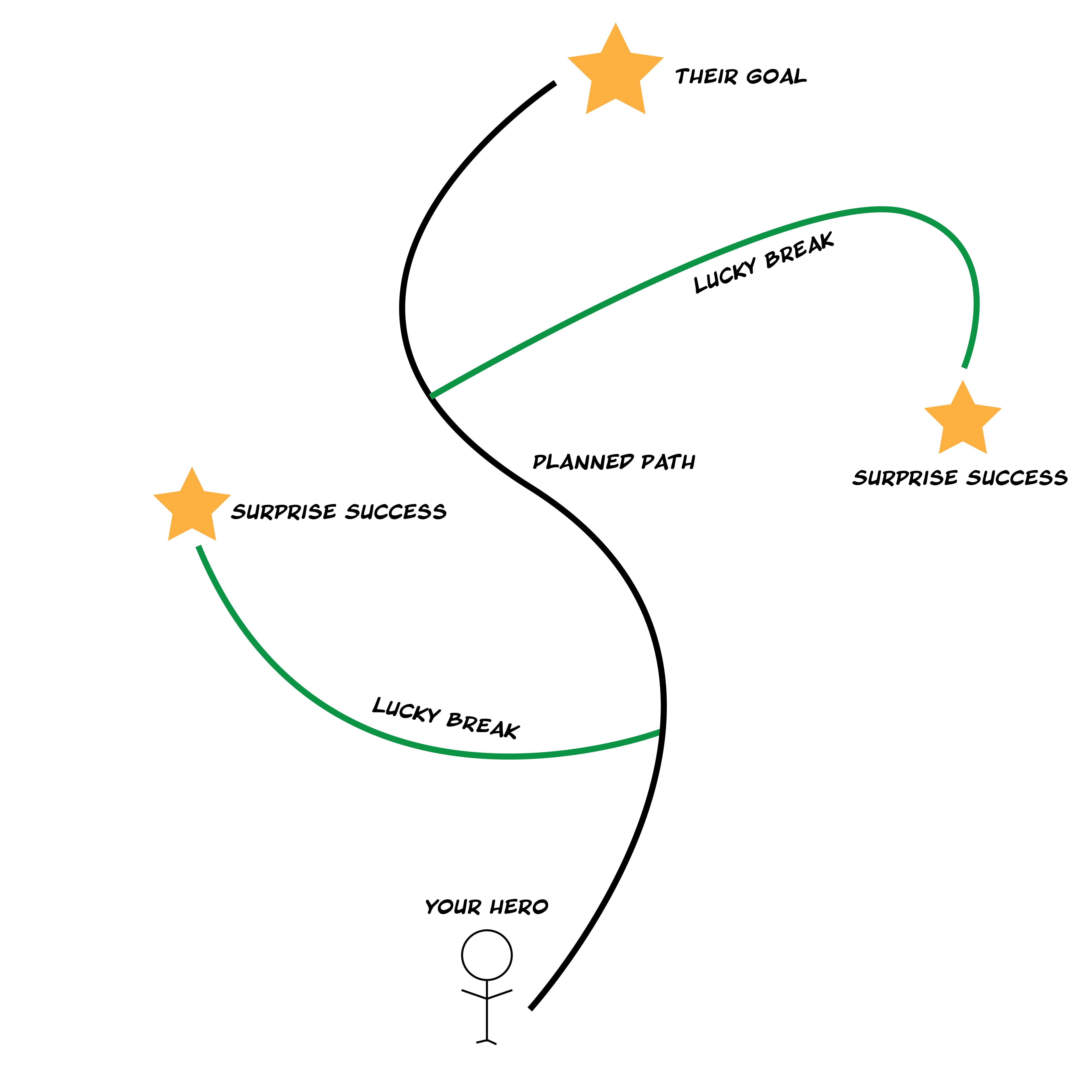 One of the more practical pieces of advice refers to why your parents probably walked so slowly through museums or monuments, when you just wanted to get to the ice cream: "Always read the plaque next to the monument." His answer to this one seemed personal. It was like he really cared about it because he had learned so much from reading plaques and wants others to experience that joy:

I was hiking in the Cotswolds just this week, and there was a plaque about a nuclear bunker that we’d walked past and had no idea what it was, or that it was even there. And then there was a plaque for a site that turned out to be a burial mound that they believe is older than the pyramids. There’s always a story about something. And it’s not evident or obvious, and it will always enrich your lives. And there’s a courtesy in the plaque saying, “Hey, I’m pretty interesting. You just spend one minute here, and I’ll tell you. I’ll let you in on the secret.” And then you do it and you say, “Thank you, plaque. That was amazing. I’m so glad you stood there all that time.”

Clearly, Kelly is a thoughtful guy and seems to spend more time than the rest thinking–about life, about living, and about everything in between. Actively thinking about the problems were facing–not panicking to solve them–will do us all well. This is what Kelly has to say about spending time in reflection and thinking:

I think you kind of almost veered onto Alfred Whitehead’s definition of civilization, which was that civilization advanced to the degree which we didn’t have to think about other things. So instead of having to think about where am I going to get enough food to eat, we could think about some other things because we have a system called civilization that provides all the food that we need and more. So I think what I would see over time is us switching where we spend time with our attention and our thinking, up the Maslow hierarchy, away from basic things about survival and shelter, maybe away from just generic things about having a job and being occupied to higher level things of self-realization in the larger sense of not just our own individual self-realization, but where we’re going as a society, as a collective species.

And we have collectively a very difficult assignment, which is, who do we want to be as humans? What do we want humans to be? And one of the reasons why I’m really keen on artificial intelligence is that we’re going to use A.I. to help us answer this question of what do we want humans to be. Because we’re going to be giving them lots of things that we thought we were about and realizing they can do that. And I think this larger identity problem of not just who am I as an individual, but who am I as a human, is where we’ll spend more time. And as we go on, I think this kind of identity crisis, not just on an individual level, but as a collective level, becomes more and more of the conversation.

His article that spawned this interview is a delight to read and I think more people should attempt to publish something similar. I have a doc called "My Life Thesis," where I record principles I want to live by. Most of them I hear from someone on a podcast or read about in a book, but some I've deduced myself–it's quite a lovely experience when this happens.

This type of essay is important because it's likely you have some bits of advice you live by, whether you do so consciously or not. Extracting the pure insight of those bits of advice into one or two sentences helps solidify the lesson and make it more tangible. You likely have much more insight in that little head of yours than you think you do. How much more interesting would the world be if we shared it all?