Which is better: instinct or reason? 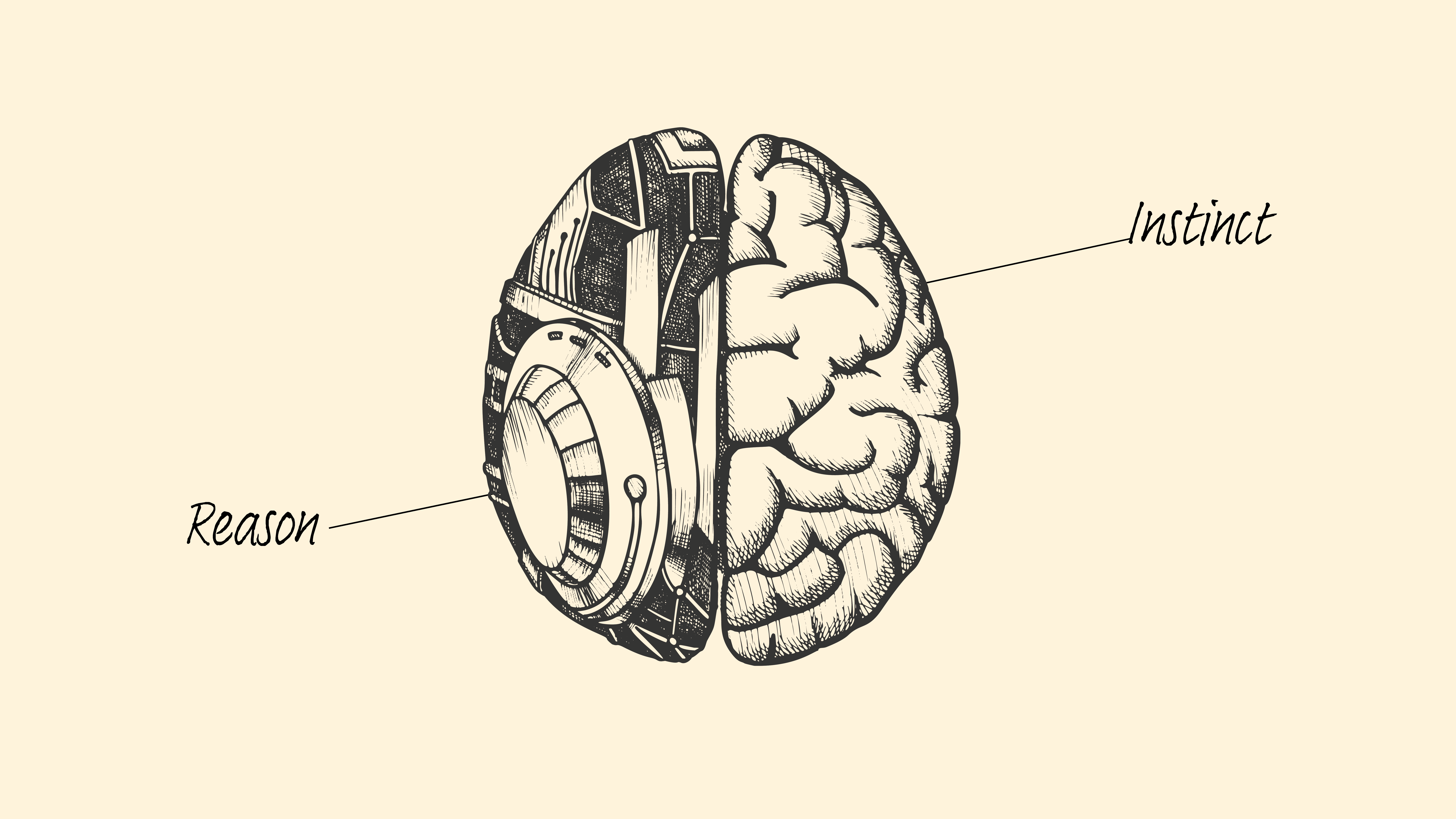 I. Trying to change the behavior of someone who acts off instinct by persuading them with logic and reason is a formula destined for failure. You cannot combat intuition or "feeling" through data, logical conclusions, or experimental studies. The two are in direct opposition to one another.

Scott Alexander, on his Astral Codex Ten blog, has described these two driving forces as "built in micro-managing instincts" and "human reason." In an effort to explain the two, he illustrates the all too common story of a daughter wanting to marry someone she's "in love with" while her parents wish for her to marry someone else, usually someone who has a prestigious profession. The daughter is acting on instinct. For whatever reason, she believes this guy is a good life partner for her. He could be funny, handsome, or smart, but whatever it is, she's basing her decision on an instinct. The parents, who want their daughter to have a good husband that will support her, be a good father, and give them incredible grandchildren, are acting on reason. They know this other guy has a more prestigious profession than the current love affair, which means more money and a stable life, which leads to healthy offspring. It makes the most logical sense for the daughter to pick the guy behind door number two. Often, though, she goes with her instinct and not rationality. Is this the better decision? Or just how most people decide and it seems to be working out, so people keep doing it?

That is a perfect example of the dichotomy between human intuition and human reason, which makes me ask, which is better? Or, is there not a better way and the best possible route is to combine the two–using instincts to guide your initial options and logic to do your due diligence?

II. Intuition, or "gut-feeling" as it is casually called, is part of the automatic part of your brain that processes information. Psychology Today gives the example of "highway hypnosis," which is what happens when you leave your house in the morning and arrive at work fifteen minutes later but you don't have a conscious thought about the drive there. The automatic part of your brain took over and did what it does best, rely on past situations (your drive every single day to work) to formulate and create the best outcome. In this case, it's your arriving to work safe and sound.

A paper on intuition and insight explains that intuition is a "non-analytical thought process that results in certain behavior that is not based on an exclusively deliberate and stepwise search for a solution." You just know when you know. The interesting thing about intuition, as described in academic fields, is that most people agree intuition is formed by your brain scanning and organizing events in your long term memory that are similar to the one at hand. But in our case, of the daughter using intuition to pick her life partner, her brain doesn't have any long-term memories to scan that can illuminate a path forward. She's never picked a life partner before. Maybe she's read about certain traits that are admirable in books, seen them in movies, or heard about through close friends or more peer-based family, but certainly not in her own life. So, does this mean some aspects of intuition are innately given to us, such as how to pick a life partner, while others are learned experiences? That makes sense.

Most sources explain intuition as the choice your brain thinks is the best which is deduced by examining past experiences and events stored in your long-term memory. To me, it seems that intuition is a personal form of analytical human reason. You aren't actively going through past situations in your life and comparing how they turned out to what you want to happen now, your brain is. But if a third party, in our case the parents, actively went through past situations in your life or their life and compared how they turned out to what they want to happen now, that would be called human reasoning, the other decision-making tactic I'm exploring in this essay.

So can intuition be described as passive-personal reasoning? I think so. Instead of personal intuition and third-party reason being two separate methods of thinking, they could be the same method of thinking, but one is unconscious and personal while the other is conscious and impersonal.

Dynomight, in the post that started the Astral Codex Star article, wonders the same thing:

After all, why do you want to marry someone hot? Evolution made you that way because hotness is a proxy for good genetics. Your genes want you to reproduce with someone hot so that you will produce lots of kids (who will have lots of kids). Your parents care who you marry because evolution tuned them to help you reproduce your genes (which are also their genes).

So… that seems confusing. Don’t you and your parents have the same priorities? Why would you give such different weights to different characteristics of who you breed with?

Your parents share an equal number of genes with all their grandchildren. But you share twice as many genes with your kids as with your nieces and nephews.

If you marry a doctor, maybe they’ll help your niece with tuition or convince her to major in pre-med instead of comparative Sanskrit opera studies. But if you marry someone with amazing genes, your niece will get none of them.

If the daughter marries an amazing doctor or lawyer, the families value on the social hierarchy will elevate. This is good news for the parents in two ways. First, they are proud their daughter married someone prestigious. Second, they now have the benefit of a higher social hierarchy passed on to all their grandchildren. If the daughter married some handsome hunk who was worthless, a few of their grandkids may look good but the rest of their grandkids (and their family tree) don't really get anything out of that deal. How rude.

The second theory is that perhaps the parents, as they have aged, just changed what they focused on. Sure, the conflict mentioned above may be there on some unconscious level, but that's not why they differ from their daughter's mate selection.

IV. As we come to the conclusion of this essay, are we able to tell which insight-seeking practice is better than the other? No. But I am able to conclude, with some hesitation, that intuition and third-party human reasoning are two sides of the same coin and that intrigues me. Perhaps the best way to go forward with big decisions is to use both strategies: passive-intuition to determine your choices and find a path forward and then calling on reason to do your due diligence. If you stumble upon something that is an apparent red flag, you now know which choice not to go with and can determine your options once again.

Let's say the daughter, Cheyanne, loves Kyle. They've spent the last five years together and there's a massive soft spot for Kyle in Cheyanne's heart. They've graduated high school together, moved in with one another, and are experiencing important life moments together. But, Kyle is a loser. Cheyanne ends up paying the bills because Kyle can't get a job and on the rare chances he does get a job, he gets fired not long after for showing up late, yelling at customers, and has been caught stealing more than once.

Since Cheyanne loves Kyle, he is an obvious long-term mate option. Her intuition says he's going to change and once he does, he'll make a great father/husband. As they get closer and closer to tying the knot, the feelings of love and admiration subside and Cheyanne starts to deal with the very real, "Oh my gosh, is this going to be my life?" feelings. Now, she starts down the road of human reason. Once she does, she sees it is lined with red flags and caution signs, nudging her closer and closer to make the decision all her friend's have been persuading her to do from the start.

I'm okay with not knowing the answer. I think it's a hard question to find an answer to. But I'm proud of the ideas and rabbit holes I explored because I'm wanting to write about things as I'm learning about them, and not with a hindsight bias. I'm closer to understanding human intuition vs. human reasoning now than I was when I started writing (and I hope you are too) and I'd say that's a job well done any day of the week.